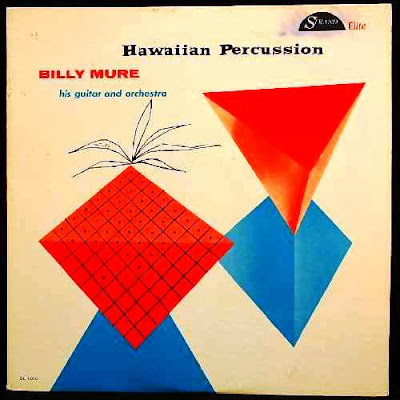 I picked up this pretty little record the other day and did a little research on it.  It turns out that Billy Mure just recently died this September at the age of 97, not too far away from where I live in Florida.  I thought it would be fitting to give this album the attention it deserved.  In addition to his solo albums, Billy was also the man who arranged Bobby Freeman’s late 50’s hit “Do You Wanna Dance?” He was also known for records that were filled with overdubs and crazy guitar work.  This, however, is a more straight forward affair.
Yes!  Another version of “Hawaiian War Chant!”  I am really amazed how many great versions of this song there are.  This one is bouncy and the melody is picked swiftly on the guitar. It’s very nice in a very non threatening kind of way.  However, after an organ break, the guitar turns savage.  Billy’s really not foolin’ around here.  As the song goes darker, this guy tears into his first solo on the record with some aggressively sharp guitar stabs.  It’s nasty sounding, especially by 1961 standards.  Then the steel guitar comes in and saves the day.  Like a loud drunkard being settled by his friend, the steel pacifies the guitar solo and the jaunty mellowness continues.
That’s one thing I really like about this record:  the songs don’t always keep the same rhythm throughout the entire song.  “Song of the Islands” is a wonderful example.  It starts off straight, with a major focus on the percussion, then starts to swing ever so slightly.  About ¾ of the way through, it kicks into high gear and gives us a beat we can really dance to.  It then slows down one more time and takes us home. 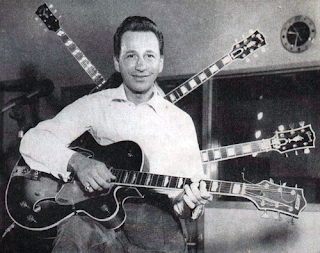 The organ sound on this album is absolutely heavenly.  It’s watery and dreamlike.  Sometimes it chirps like a cricket, and sometimes it just tickles your ear, but what it really does is make you feel something.  Some of the repeating figures played in “Kalua” sound like some of the 70’s arpeggiated synthesizers I have heard on some Todd Rundgren (among many others) tracks.  It makes me picture a gigantic piece of glass that has a million spider web-like cracks in it.  If someone could play those cracks, that’s what it would sound like.  It feels like some kind of effect, but because this was released in 1961, it’s more than likely just some good old fashioned fancy finger work.  Billy arranged/created some very interesting sounds that weren't explored until almost 15 years later.  I love hearing this kind of stuff.
There is a cover of “Sleep Walk” on here as well.  Considering the year this came out, and the instrumentation of the album, it is a very logical choice.  However, it’s really hard to capture (let alone top) the magic of the original Santo and Johnny version.  Billy’s take is adequate and close to the original, so it feels more like a rehash instead of a re-imagining.  It strikes me as something the record company would have asked him to include.
I actually passed over this record once.  It was only $.50 (what the heck was I thinking?) at a pawn shop. I told my wife that I saw a cool record with a geometric pineapple on it, but passed it up.  She told me I should go back and get it, and I am so glad I did.  This is everything I wanted it to be: cool percussion, cool guitar licks, cool steel guitar, and very cool greasy hair on Billy’s picture on the back cover.  Sometimes, wives are cool and make you delicious things to eat.  Sometimes wives are very cool and tell you to go back to the store to buy awesome records.  My wife was very cool that day.
On another personal note, buying this album so soon after Billy's death makes me wonder about the timing of things.  I would have loved to make the short drive to where Billy lived and see him play a show or get a guitar lesson.   My understanding is that he was still playing regularly.  Check out this link.  How often is it that someone from the 50's is still out there doing what they love?  I do consider myself lucky to have found this record though, and have heard a lot of good things about his other more layered guitar work.  I actually found a copy of "Supersonic in Flight" the other day, but it was scratched and unplayable.  That's how it goes sometimes. Tones:  Like I said, that organ is the surprise hit of this album.  It’s as inviting as a hug on a cold day.  The percussion is also captured nicely.  It is difficult for me to tell what the bamboo log is, and what the temple block is, but I like ‘em when I hear ‘em, and according to the liner notes, they're on here.

Cover Note:  Geometric figures, weird paintings that have little to do with the actual music, and huge advertisements of stereo sound are all good signs when it comes to records collecting.  This one has an orange square pineapple and three other geometric modern marvels on it.  Mine also has an actual orange sticker placed on the bottom right that says “STEREOPHONIC.”  Was stereo some kind of selling point in the late 50’s or something?  Just kidding.

Price paid:  If you see a record that looks cool to you for any reason and it’s only $.50, just buy it.  Don’t be silly like me and have your wife tell you to go back and buy it.  I really must have been having an off day.  I think I had a job interview or something.  Anyway, $5.00-$8.00 is fair.  This is well above average.

Bottom line:  It’s fun.  It’s melodic.  It has nice sound, and it has a great cover.  My wife also likes this record, so I advise you to throw your headphones away in the garbage (or keep ‘em, whatever) and listen to this with your family and friends.  Billy’s the man.  Let's go dig through some boxes, find Billy's records, and give his music the spins it so desperately deserves.

Promote Your Page Too